Canine influenza is generally not a stand alone problem. Symptoms similar to influenza in humans tend to accompany other complications according to the breed. 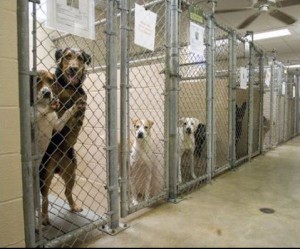 For example Greyhounds and Great Danes tend to be disposed to pneumonia. These breeds have narrow chests, indicating their susceptibility. Those breeds who have wider chests, such as the Bulldog are more disposed to limit their respiratory problems to the upper chest.

Influenza symptoms can include any one or more of the following symptoms:

Other respiratory problems that are more serious than canine influenza include bronchitis, bronchiectasis, pulmonary oedema, pneumonia and pleurisy.

Drooling and/or retching can accompany tonsillitis.

Kennel cough is characterised by, not surprisingly, a frequent cough.

Distemper has a number of stages which include a respiratory stage:

Then there are stages of gastro intestinal symptoms, skin symptoms, the nervous system and finally eye complications such as ulceration of the cornea

Canine influenza is not a problem in its own right, although the symptoms can look like it.

However, what is common to all these problems are your dog’s immune system. Your dog will not have any ailments when he has a strong immune system, respiratory or otherwise.

A strong immunity comes from a variety of important areas.

When the diet is as close to that of his ancestors, as is practical for most people, then this will surpass all other diets.

When his health care doesn’t suppress his symptoms, but rather supports his body’s best efforts, his immunity will grow ever stronger. Natural health care, especially homeopathy probably offers you the best dog (and human) health care there is.

When he lives in an environment that supports his strong instinctive needs, his stress levels will be as low as they can be.

It’s really down to you and your actions. Along with all other health problems, canine influenza is not something to worry about when you care for your dog holistically – for all his needs, whether they are physical, emotional or mental.