Humanity, being the arrogant lot we are, tend to think we know best especially when it comes to our much loved pets. However, I have come to realise that we know very little. That the animals do in fact know much more. If you learn to listen to your dog, you have a better chance at understanding them. 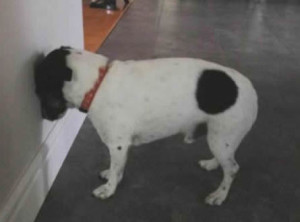 One of things animals face is the total ignorance of some veterinarians of their basic needs. Dogs with injuries are often told to bed rest, even though this drives them to distraction, being the active animal they are.

Medication dulls their senses too, making it more difficult for them to listen to what their body is telling them. Pain after injury is the best way to tell a dog not to move. Not a pain killer then forced rest.

Let me give you an example.

One of my dogs came to me after he had been run over. He had spent a month at a vet’s clinic, with the normal toxic drug load. The combination has been a constant headache for me to heal his injuries. Some progress has been made over the years, enough to give him quality of life if not total freedom from the injuries.

He recently hurt an old injury after racing around. He loves nothing better than his evening walk with dozens of racket-hit tennis balls. He always races after them, then races back to me to throw it again. This time, he walked forlornly back to me. Then he turned, ball in mouth and headed for home.

After a couple of misses, I hit on the correct homeopathic treatment for him. He chose how much running to do himself. He enjoyed a gentle run after the first ball, but for about a week after he had hurt himself, he regulated his running to this. After one run, he simply headed for home, ball in mouth.

When he felt better, he naturally ran more, by returning the ball to me for more throws.

Although his homeopathic treatment helped his healing, it didn’t mask his symptoms. He was still in control. He decided how much running his body could manage.

By learning to listen to your dog, you can judge what he needs, far better than the majority of professionals.

Would you like to know more about natural dog health?