Recently I decided to adopt another dog. I really wanted to rescue one from death row, but everywhere was closed. I finally found a young dog who didn’t get on with her family. 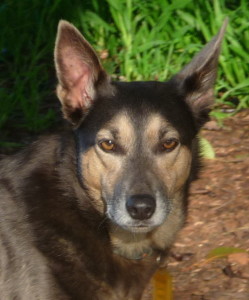 I had no qualms about getting her. I knew the problem didn’t lie with her. Animal problems never do lie with the animal. They are perfect just the way they are. It’s the human/s in their lives that are the problem.

Sure enough, when I arrived at her home, she came to see who I was, then scuttled off. Just viewing her behaviour, I could see what the problem was. She was highly sensitive, and the family were not able to meet her needs.

If this was not true, the world would be a very different place.

I’m not suggesting it is anyone’s fault. It’s just the way it is.

But you can do something about it. You don’t have to be this way.

This very sensitive dog went everywhere with her tail down. She ran away and avoided people. A raised voice, even directed at someone else, sent her off in fear.

She needed her self confidence boosting. She needed constant reassurance.

Within a couple of weeks, she had her tail up most of the time. She bonded with my other dog, playing, taking it in turns to chase each other. It’s a delight to watch. They are both totally abandoned in the joy of the moment.

Humans need to be open and adaptable to the needs of those around. It isn’t good enough to expect everyone to fit into a rigid regime that suits us. We need to learn to adapt to each situation as it arises. Some dogs (and people) are more sensitive than others. They need more gentle handling, more reassurance than others.

I recently read of a very valuable young colt who could not adapt to being stabled. The stable management had rigid rules, so tried to impose these on the colt. The colt could finally take no more and badly injured a stable hand, who was mishandling her.

As ever, the animal is found to be at fault and he was shot.

All the stable management needed to do was to accept that not all horses are the same. If they could have accommodated the colt’s needs, he may well have gone on to win them the enormous amount of money his breeding suggested.

My dog could not meet the needs of the family because her own needs were not being met. Because I accept her for who she is, and encourage her, she is now blossoming.

When your basic needs are not being met, you need the situation to change, not necessarily treatment. This is what homeopaths call a maintaining cause. There is something constant in your life that is preventing you from being who you are.

Of course, it may be difficult to change every situation. But with good homeopathic treatment, one of two things can happen.

Either way, your tension is greatly reduced.

Homeopathic treatment always starts by examining the possible cause.