There are just a few reasons why dogs get worms. There are many more ways to treat worms in dogs than by using a chemical, which often had side effects. 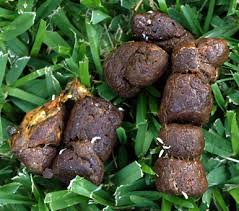 One of my dogs, who is about 12 years old, became so ill recently, I thought she was nearing her end. However, after intense homoeopathic care, she bounced back.

My animals are all fed a healthy natural diet. This prevents worm proliferation and flea infestation. I am in the habit of checking my cats and dogs stool regularly for worms. Tapeworms are the most common worms in cats and dogs. They are easily visible in fresh stool as white, moving grains of rice. As they die, they yellow.

As long as there is no evidence of worms in a dog’s stool, then you don’t have to be concerned.

However, treating my dog had taken my attention away from my regular inspection of their stool. I was more interested in looking to see how she was coping with life. It wasn’t until she squatted down to do a bowel movement beside me, that I noticed it was wriggling with life.

Worms take advantage of an ailing animal to proliferate. An ailing animal, even though eating, will not be able to digest as quickly. And it’s this slow digestion that allows worms to breed out of control. Which is why cooked food promotes worms – it is digested much more slowly than natural food.

I created a tapeworm complex remedy (made up by combining several homoepathic remedies) years ago, but have never used myself. Many people have used it to good effect, but I never had the need to.

Now was my chance.

I gave her the remedy twice a day. She was very happy to take it. After a couple of days, I put it in her water, so she could freely dose herself. She also had access to her normal bowl of water, with no remedy in. This is important. Allow the animal to dose themselves as and when required.

After a couple of days, I noticed the worms had reduced to about 50%. After a week, there was only the odd worm. It probably took about 10 days for the stool to be completely free of worms.

How much better this approach is than the harmful chemical wormers that kill off the worms, but also harm the host.

My Tapeworm Complex (email me for details – see contact above) will work on dogs, but dogs fed a commercial dog food are contributing to the problem. Learn how to feed your dog a quality, natural and healthy diet, easily and make worms in dogs a thing of the past.

2 replies to "How to Treat Worms in Dogs Naturally"