Recently, my dog Shenzi died. She was 14 and had had an uncertain start to life, so I feel she probably did well. Since living with me, her only health care was homeopathy. Last year was the first time in her life she had became ill. Intense homeopathic care dealt with her issues then, but this year it seemed it was her time. 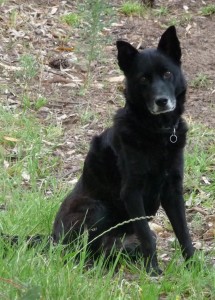 One morning, she didn’t manage to eat all her breakfast. This was serious as she would normally consume everything in sight, plus clean up after my other dog and the cats, plus visit next door for any clearing up after their cats and dogs.

That night, she declined her normal evening walk, as well as her bone. The next day she lay quietly in her bed, moving little. She died during the night.

The whole process took less than 48 hours, from the initial signs to the end. At no stage did she indicate any distress. Her bed was beside mine and she uttered no sound during the night. She did appreciate being offered her water bowl, and being carried outside to urinate, but wanted nothing else.

I believe that time is important in preparing for the transition.

This is such a different picture of the end for those animals fed commercial pet food and constantly on drugs. Then, the end can be drawn out, fearful and painful.

Allowing your pet the freedom to go when they are ready is, I believe, to be far more humane and far less controlling than when you decide to kill them. Treating them naturally throughout their life ensures they have the best and healthiest chance in life and go quickly at the end.

Even without this, homeopathy very adequately deals with any anxiety, fear or pain prior to the end, allowing them to either slip away quietly, or to bounce back, if they are not ready to go.

I have found that animals die easily when it is their time, when they have been fed a species-specific diet and treated with homeopathy almost exclusively.

I believe compassion comes with not trying to control everyone. If we don’t speak the language, how on earth can we tell what an animal is going through? The fact is we can’t. It’s far more common to project our own ideas onto them and make a decision based on this. I believe all that does is to make us feel more comfortable, especially in the eyes of the public. But is it what the animal wants?

Apart from this, there is always the danger that the vet did not, in fact, kill your animal. That your pet may wake up, either after you buried him, or in a rendering plant, where euthanised animals are taken, mostly to be turned into pet food.

This happened to one dog, who thankfully, had not been buried or disposed of. What about the others?

I have also found that my grief for an animal who chose when to go is far less than when I have had them killed (in the long distant past). I attribute this to the fact that they chose their time, rather than me in my controlling state, going against their wishes.

Would you like to know more about how to keep a naturally healthy dog?