Whilst mainstream veterinarians will tell you there are no such effective choices as natural anti inflammatory options for dogs, or any other animal, this is not true. What is true is that this is how they have been trained. So they will prescribe NSAIDS (non steroidal anti inflammatory drugs). 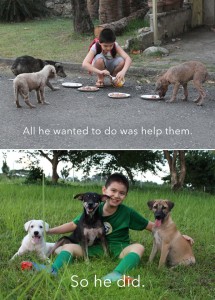 However, those people who have their dogs on such medication (or are taking them themselves) tend to see the side effects of these drugs sooner or later. The dangers of the common ones (such as rimadyl, metacam, deramaxx, previcox, etogesic, aspirin, ibuprofin) include:

All medication suppresses the immune system, often making the problem worse and leading to further and more serious conditions.

The common areas for inflammation in dogs are the joints and the gut. It is well known now that NSAIDS interfere with the healing of joints, tendons, ligaments and the gut, weakening them, rather than helping with their repair.

Inflammation is a good thing when it happens after an acute such as an injury. The affected area becomes red, swollen, hot and painful. This is nature working at its best, showing that rest is needed to heal. And dogs are no fools. If left to their own devises, this is what they will do.

Sadly, humans have to interfere in this perfectly natural and healing process, inevitably creating a bigger problem.

Chronic inflammation is a bit different. It can result from a poor diet, from poor living conditions and from the suppression of the immune system by medication. Rather than look for natural anti inflammatory remedies, it is best to first consider these causes.

Most dogs are fed commercial dog food, which is great for the profit of the manufacturer, but less so for the health of your dog. There are far too many things wrong with commercial dog food to go into here, but the main reasons are lack of species-specific quality nutrition.

If your dog lacks the proper nutrition to keep them healthy, problems are inevitable. Changing to a diet of natural, quality, species-specific diet and the problem often disappears on its own. That is if the living conditions are right and the immune system hasn’t been too badly compromised with numerous medications.

A dog’s natural living conditions include a pack (ie other dogs or animals they consider part of their pack, including humans). A single dog left alone all day is a stressed and unhappy dog and will often have behavioural issues such as digging up the garden and constantly barking. Can you blame them?

Dogs don’t punish each other, at least not as much as humans do. Dog punishment to each other would be under extreme circumstances (such as threatening the safety of the pack), be quick and with no lingering residue. Most humans punish dogs because they lack the understanding of the needs of the dog. So the dog is unhappy and now confused. It’s a lose-lose situation.

Any past suppression of the immune system with medication can have a long lasting effect, preventing the dog from being able to heal themselves of any issue as it crops up.

This triple effect can have a detrimental effect on the health of your dog, leading to chronic inflammation, then often something more sinister.

If you are dedicated to the health of your dog, and truly are looking for natural anti inflammatory options for them, then consider:

You will find your dog is happier, more active and your wallet a great deal heavier, with all the cash you save.